Yesterday someone saw my Apple Watch and asked me how I liked it. This was not the first time I’ve been asked this question and my answer was the same as it always is. I LOVE IT!

In my first post I told you that I’d be blogging about technology from time to time and it seems that the Apple Watch is a good place to start. After all, most technology watchers expect that it will be one of the hottest Christmas gifts this year. As such, I know that many are thinking about it and I wanted to weigh in.

Anticipation and Introduction
When the watch was introduced I was glued to the screen on September 9, 2014 as Tim Cook took the stage to show the world for the first time this new device that had been the subject of speculation for many months prior.

I even posted a short video on my other blog earlier that day where I shared my excitement for its anticipated announcement. (In the video I said that today’s date was September 19, but in fact it was the 9th.)

Wait, Wait, Wait
The first surprise was the the rumored iWatch was to be called the Apple Watch. That took some getting used to after hearing  “iWatch this and iWatch that” in the tech rumor mills I listen to regularly. The next surprise, and disappointment, was that it was not going to be available to order until “early next year.” Early next year turned out to be April 10 at midnight pacific time. I set my alarm for 3:00am that day to get my order in with the hope of getting one of the first watches off the line.

Much to my dismay, by the time my order had processed I was told that my watch would not ship for 4-6 weeks! Others were receiving their watches by the end of the month, but I didn’t make the cut. In spite of my best efforts the demand was so high that I missed the initial wave of shipments. After waiting 4 weeks that watch had still not shipped. I couldn’t stand it anymore. I looked on Craigslist and found someone in Knoxville who had a watch for sale. I paid a premium, but I finally had my watch and it did not disappoint!

What do I like best about the watch?
There is much to like, but my favorite features are the fitness tracking, notifications (text messages & email) and the ability to take a phone call on the watch when my phone is in the other room. In fact, I just now was out on the back porch and took an important call that I would have missed if not for the watch. I also love the “complications” which are little bits of information on the watch face that quickly show me my next appointment, the weather, and even Apple’s stock price. Of course I also see the date and time as well.

Believe it or not, I also really like the ability to quickly switch watch bands to get a different look. I have the stainless steel link bracelet for formal occasions (this is the one that came with my Craigslist sourced watch), as well as a black, navy blue and sand colored fluoroelastomer bands. Each band give the watch a totally different look and I like that. It’s like having a new watch every time I change the band. 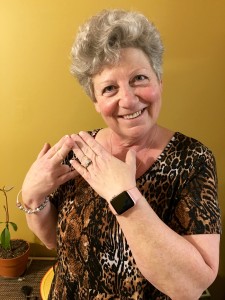 Another Convert
After months of trying to convince Christine to give up her Pebble smartwatch (she liked it mostly because it was bright pink), she finally gave in and agreed to go take a look at the Apple Watch. The Pebble’s battery was dying and this was my opportunity. I knew she’d like the rose gold watch and, sure enough, she did. It’s a more subtle pink, but it looks great and matches her rose gold iPhone 6s. She liked what she saw, but only if she could have the Vintage Rose band rather than the Stone colored band that came with the 42mm rose gold watch. No problem, and I added the Stone colored band to my collection.

She’s had the watch for over a month now and she loves it too. I knew she would…I just had to convince her to take the leap.

Where to Buy the Apple Watch
Apple has recently expanded distribution of the watch. It is now available at Best Buy, Target and Walmart. The best deal right now seems to be at Best Buy, where you can pick up the model of your choice for $100 off the retail price. Target is offering a $100 Target card with your purchase and Walmart, the last to offer Apple’s new timepiece, is selling at the suggested retail price. I suspect you’ll see it go on sale soon at Walmart for those who have yet to complete their Christmas shopping.

Of course, you can always purchase at the Apple Store if you have one nearby, but you will pay full retail there. However, it’s a great place to see all the watch models, the bands, and to try them on to see if you prefer the 38mm or 42mm size. (I suspect most people will opt for the 42mm unless they have a very small wrist.)

Bottom line
The Apple Watch makes a great gift for either yourself or a loved one as long as they have an iPhone 5 or later. It requires an iPhone for its operation and does not work with an Android phone. It’s not a cheap watch, but you definitely get what you pay for. I would suggest one of the Sport models as these are the most affordable, however I’m very glad that I have the stainless steel watch. I like the look and the crystal face is made from a more scratch-resistant glass. I thought it was worth the extra $200.

For those who have money to burn and want to make a serious fashion statement, there are also models made of pure gold that start are priced from $11,000-$17,000. Rather than spending that kind of money to flaunt your wealth, I’d suggest the Hermes model that offers the very distinctive Hermes bands and a special Hermes watch face. Still too rich for my blood, but certainly a stylish watch.