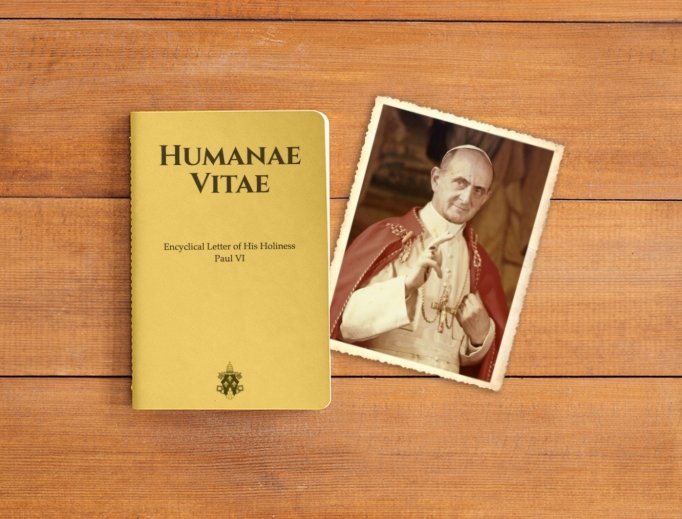 Conflict and disagreement is the norm in our fallen world. Pick up the newspaper, turn on the TV, or check your Facebook newsfeed you’ll know that’s true! Rather than being a voice of reason amidst the insanity of conflict that rages around us, we Catholics have contributed to this disunity by our failure to follow and promote Church teaching on matters of human sexuality.

Fifty years ago this Wednesday, an event took place that had had far-reaching consequences resulting in disunity within the Church and especially in the larger culture. On July 25, 1968, Blessed Pope Paul VI promulgated the encyclical letter Humanae Vitae. This encyclical focused upon three chief topics: human nature, the nature of marriage, and specifically the morality of artificial means of contraception.

The publisher of the National Catholic Register, Michael Warsaw, published an article Friday on Humane Vitae and I’d like to read it to you now. It’s called Paul VI, Prophet.

“Never has one Church document better defined the gulf between morality and the immorality of our age than Blessed Paul VI’s encyclical Humanae Vitae (The Regulation of Birth).

Contraception, abortion, cohabitation, adultery, divorce and pornography existed but were barely on the radar at the turn of the 20th century. The Protestant denominations’ acquiescence to contraception began with the Anglican Church in 1930, and by 1968, the Catholic Church stood alone in Christendom in its rejection of artificial birth control.

Pope Paul, pressured from within the Church and without to accept modern advances in contraception brought by the birth-control pill, studied the issue, leading to his prophetic document that reinforced Church teaching on the purpose of marriage and the human dignity of men and women.

In Humanae Vitae, published 50 years ago July 25, Paul correctly posited that the mainstream acceptance of contraception could open the floodgates to a host of evils: marital infidelity and divorce, a lowering of societal moral standards, and the reduction of women’s inherent dignity to an object of desire. All of these, and more, currently plague our society.

Yet there are still those within the Church who clamor for the Church to capitulate to the world, who contend that the Church’s ministers are ill-equipped to teach the faithful about marriage and the family. The brokenness of families, the widespread moral disorder in society and the sadness so evident in many lives should cause us to pause and reflect on the wisdom of the Church rather than push further to dismantle her teachings.

As we begin the second 50 years since Blessed Paul’s encyclical, I encourage you to read this document and the writings of John Paul II on the subject. If each of us does our part, bit by bit we can chip away at the culture of death and restore the family to its rightful place as the building block of a civil, Godly society.”

It is sad to say that we are currently in a time when we are experiencing such widespread disregard of Church teaching on contraception by an overwhelming majority of Catholics, including many of her clergy. A 2005 poll by Harris Interactive claims that 90% of Catholics supported the use of birth control and contraceptives. Let us seriously consider the words of the prophet Jeremiah in today’s first reading, “Woe to the shepherds who mislead and scatter the flock of my pasture, says the Lord.”

Newer polls reveal similar numbers and many so-called Catholic organizations call for us to simply follow our conscience regarding the use of artificial birth control. Think about this … up to 90% of Catholics believe it is OK to engage in a practice that the Church declares intrinsically evil!

Even if you don’t agree with the moral teachings of the Church about artificial contraception, consider the potential medical consequences. If you read the package insert for “Yaz” (one of the most popular contraceptives), there you will see increased risk of:

An expert in the study of the social effects of artificial contraception, Dr. Janet Smith, a well-known Catholic Professor and a staunch supporter of Humanae Vitae, argues that contraception is responsible for many of our culture’s social problems, including unwed parenthood, fatherless children, divorce and even poverty. In fact, Blessed Paul VI clearly saw and warned us of these consequences of infidelity and the sterilization of our marital intimacy.

Dr. Smith calls for the leaders of the Church to call us back to the basics. The Church needs to go back to the heart of things to recover a way of life that has been mocked and abused in our secular culture for too long: a life of modesty, purity, and chastity.

Many are only now waking up to the hard truth about the consequences of separating the act of marital love from the openness of that act to conception. Many are only now realizing that a culture that claims that marriage doesn’t have to be open to the bearing of children is a culture that believes we are free to redefine marriage and even to redefine the gender of boys and girls, of men and women.

Here’s the deal, the secular culture is NEVER going to be convinced of the truth of what the Church teaches unless its members embrace and live out these teachings about marriage and family life. We must unite and form our consciences according to the teachings of the Church if we stand a chance of influencing and changing the culture.

Too many children are missing in our world today because we Catholics have accepted the secular culture’s claim that divorcing the act of physical union from an openness to conception bears no consequences. But the consequences mount all around us and the evil of abortion is a direct result of this evil of sterilizing our martial relations. We must oppose the culture that canonizes barrenness, self-promotion, and immediate satisfaction of one’s every desire.

Remember, the Church communicates the teachings of Christ for our own good. Following Christ is counter-cultural. It can be very hard because it goes against the world’s values. But you must always remember that your life is NOT ABOUT YOU! As the Psalmist sings in the 23rd Psalm, “He guides me in right paths for HIS Name’s sake.” We are called to follow Christ and his teachings, even when they are difficult to understand and require self-sacrifice.

This week as we observe the 50th anniversary of Humanae Vitae, I pray you will take some time to read this prophetic document and reflect on any changes you may need to make to align your personal thoughts and practices with its teachings on human life, marriage and contraception. It’s only about 13 pages in length and it’s available on the Vatican website.

I’ll also be publishing several links to articles about this encyclical on my website, deaconscott.com. I invite you to take some time this week to read these reflections to help you to form your conscience on these important issues of natural moral law. You’ll also find a trailer there of a new documentary movie entitled Sexual Revolution: 50 Years Since Humanae Vitae that I believe you’ll find very informative. It is so important that we all understand WHY we believe WHAT we believe.

Let us make every effort to examine our personal beliefs and consciences in the light of the teachings of Christ, communicated to us through the Church and necessary for our eternal salvation. Unlike the people in today’s gospel reading who were like sheep without a shepherd, let us recognize that we have the Good Shepherd among us and for our own good let us follow his teachings on all matters of moral consequence.

Rather than participating in the disunity of the world around us, let us unite in Christ and turn our backs on the ways of the world that are opposed to his teachings, as communicated through His holy catholic and apostolic church. Let us vow today to repent, choose life, and together oppose our culture of death and sterility.

Links to Humanae Vitae and articles/movie about the Encyclical:

Humanae Vitae: The Courage of Pope Paul VI Stood Out During a Tumultuous 1968

Humane Vitae: Why is it Important Today?

Medical Consequences of Contraception: How Sterilizing Steroids Disrupt the Spirit, Mind and Body

If 90% of Catholics Contracept, Then What Does That Say?

Why Humanae Vitae Will Always Matter