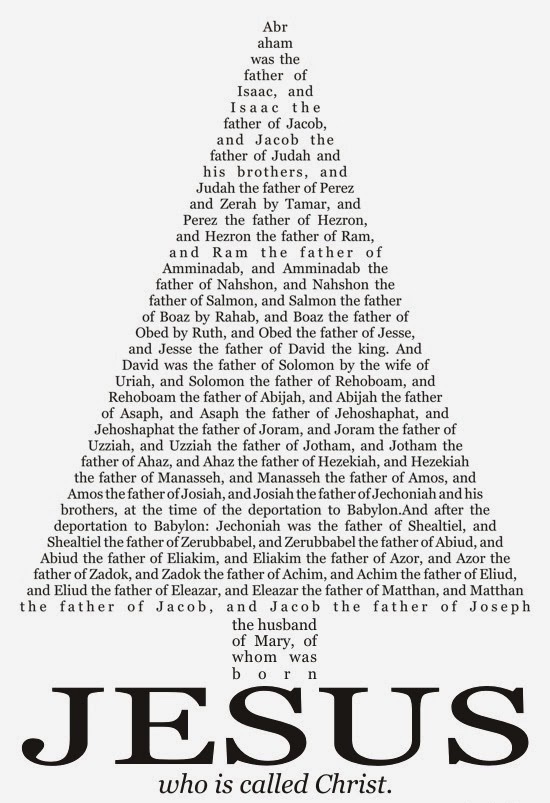 This is the gospel reading the deacon dreads having to proclaim at the Christmas vigil Mass when the church is full and all the kids are looking at you funny as they hear these Old Testament names being pronounced by the 21st century deacon. If he’s wise, he reads them quickly and confidently, even if he butchers the pronunciations.

At least at the Christmas vigil there is an alternate gospel, assuming the celebrant allows it to be read in place of this one. Today there is no alternate!

All kidding aside, today’s gospel is important because it emphasizes the human ancestry of Jesus, all the way back to Abraham.

Some argue that there is a problem with this account of Jesus’ lineage in that it conflicts with the lineage given in Luke’s gospel, which traces him back to Adam. Some have tried to deal with this issue by saying that Luke’s genealogy really doesn’t give Jesus’ lineage through Joseph at all, but through Mary.

To explain this apparent conflict between the accounts in Matthew and Luke, and whether or not they are providing Joseph’s or Mary’s lineage, one needs to know something about how ancient Jewish genealogies work, but we don’t have time to go down that rabbit hole here today. And, it’s really not the point of today’s gospel passage.

The important thing to note about Matthew’s account of Jesus’ ancestry is that it reveals that Jesus was part of a human family that, like most, was fairly dysfunctional—a mix of the good and the bad. And this is such good news for us.

If you listened carefully to the reading you might have caught the fact that five women are mentioned, which was unusual at this time. The first was Tamar, who had relations with her father-in-law to conceive Perez.

The second was Rahab, the mother of Boaz. Rahab was a prostitute who lived and worked in Jericho. We all know people who may feel as though, like a prostitute, their lives are steeped in sin. Well, guess what? Jesus had this prostitute in his family tree and he was pleased to be her relative.

The third woman mentioned is Ruth, mother of Obed, whose father was Boaz, the son of this prostitute. Ruth was another outsider, a Moabite not an Israelite, but a foreigner. Many people feel like outsiders due to their past mistakes or their socioeconomic status. But Jesus didn’t shrink from being known as a descendent of Ruth. He was pleased to be her relative.

The fourth woman is unamed, but she’s identified as Uriah’s wife. This was Bathsheba, who committed adultery with David. You’ll remember that David had Uriah killed in battle.

The fifth woman named today is Mary, the mother of our Lord.

Today’s reading shows us that Jesus descended, through his human parents Joseph and Mary, from a fairly dysfunctional family, a mix of good and bad. This is truly good news for us…it is the Christmas message. God himself came to dwell with the dysfunctional and dubious family of man. To come into our world as one of us in all ways but sin. To enter into our drama and to take upon himself all of our sins. He came to die not only for those of us who love him, but also for all those who have rejected him, all those who we might consider to be unloveable and living a life of immorality.

So the question I’d like each of us to ask ourselves today is this: How can we better reach out and embrace the Rahabs and Ruths in our own family? How can we better love them the way Jesus loves them? Let’s bring this thought to our family Christmas gatherings and be an instrument of peace and healing in the midst of the drama our family lives.