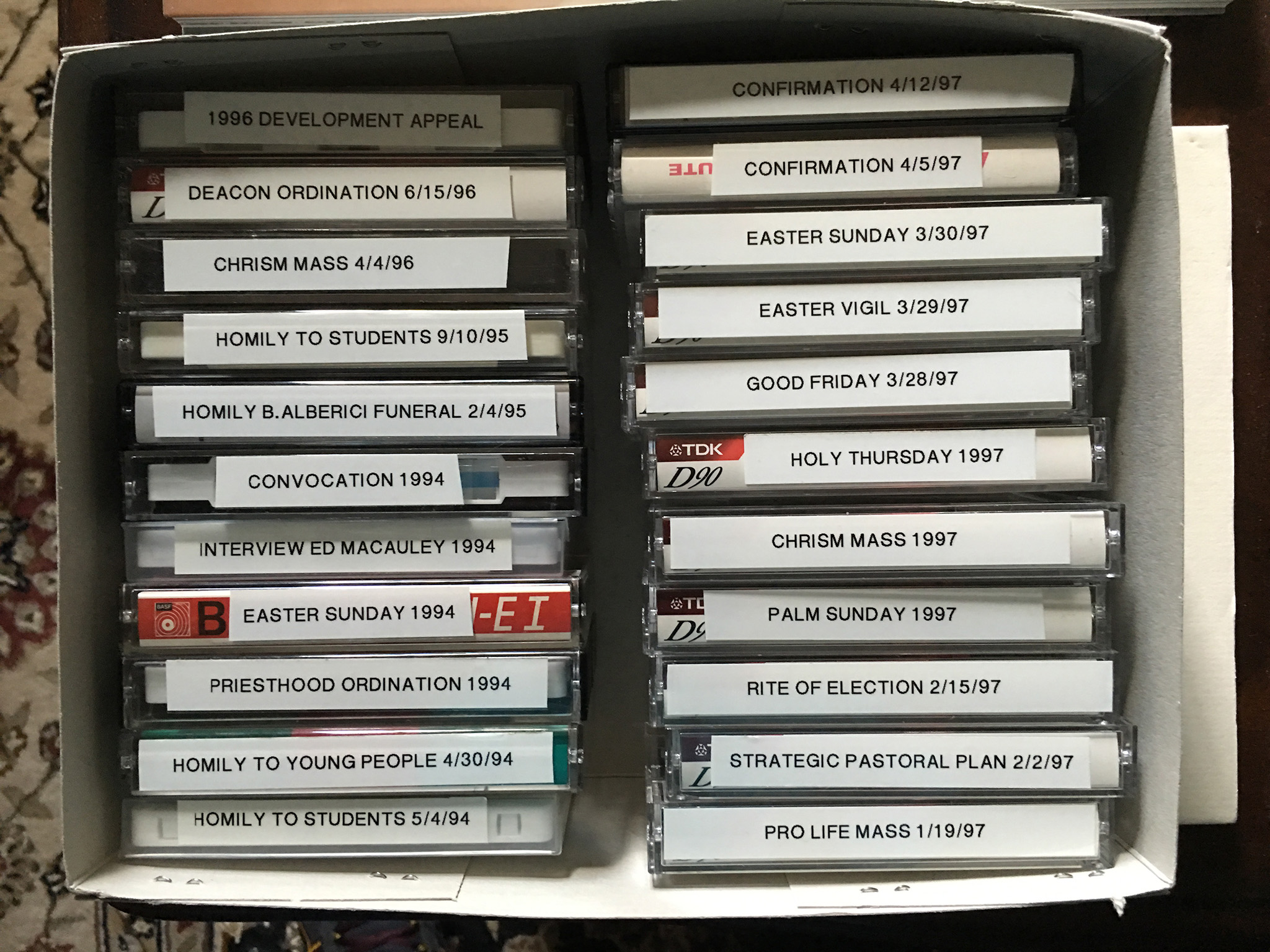 Recently Cardinal Justin Rigali, Archbishop Emeritus of the Archdiocese of Philadelphia, asked me to help him with a project. He has approximately 600 homilies dating back to 1994 recorded on cassette tapes. These homilies were recorded over a period of several years, from the time he was Archbishop of St. Louis through his tenure as Archbishop of Philadelphia. The project involves making digital copies of these homilies and publishing them so they remain in perpetuity for anyone who is interested in listening to them in the coming centuries.

Homily on the Occasion of Mother Teresa’s Death
One of Cardinal Rigali’s homilies was given on the occasion of the death of Mother Teresa when he was Archbishop of St. Louis. The Mass was celebrated at the Cathedral of St. Louis on September 11, 1997. I thought this would be the perfect time to share this homily in that Blessed Mother Teresa will be canonized as Saint Teresa of Calcutta tomorrow. Click the PLAY button below to listen:

Preserving the Handmaids Recordings Too
At the same time my employer, the Handmaids of the Precious Blood, has hundreds of audio recordings of their founder speaking at past retreats and other occasions dating back to the 1950’s. Many of these recordings are on reel-to-reel tapes and are deteriorating quickly. They are all precious and must be preserved before the tapes are unplayable due to age. They wish to preserve and pass on these recordings to future generations of Handmaids. These tape recordings must also be copied to digital media so as not to be lost.

Duplicating, Editing and Publishing the Recordings
Both of these projects are significant and I simply wouldn’t be able to undertake them without help. Thankfully, the kind folks at Fleetwood Photo in Knoxville have agreed to do the duplication for us at a very reasonable price. While there are many different companies that do this sort of thing, everyone feels much more comfortable having the tapes stay in Knoxville for this conversion without having to send them off to a remote location. Both Cardinal Rigali and the Handmaids are extremely grateful for the service being provided by Frank Distefano and his team at Fleetwood Photo.

In Cardinal Rigali’s case, once the cassette tape recordings have been converted to digital MP3 files, many of them will need to be edited to extract only the homily from the recording before publishing them publicly for easy access. This is where my work begins.

Project Scope
At this time I have no idea how long these projects will take to see them to completion, or even the best method for publishing the newly created digital recordings. Most likely I will be publishing Cardinal Rigali’s recordings on a new website, while the Handmaids’ recordings will remain in their community’s private archives. They too require a well-considered strategy for preserving and easily retrieving these digital recordings in the years to come.

The Satisfaction of Using One’s Gifts for the Church
This type of project is right up my alley. There is nothing quite like using your gifts to make a contribution to the Church. Whatever your gifts may be, God has given them to you to share with others to help build up his kingdom. I consider it a wonderful blessing that I’ve been chosen to assist with this important diaconal service project. I feel somewhat like a modern day Gutenberg for my role in the preservation and sharing of these important reflections and teachings with generations to come. Very exciting! I’ll share more about the project as time goes on.

Please pray for me!