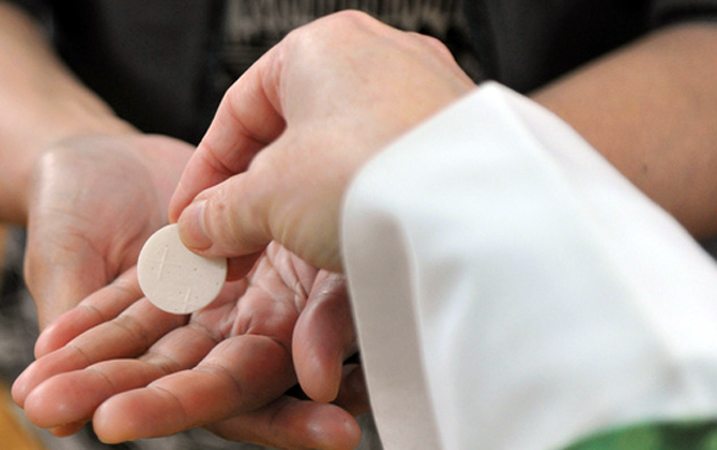 Today’s Gospel reading is perhaps the most difficult of Jesus’ teachings for the Jews of his day, as well as for so many people in our own day. Jesus again proclaims that HE is the living bread that came down from heaven and that whoever eats this bread will live forever. He takes this claim one step further by saying “Amen, amen, I say to you unless you eat the flesh of the Son of Man and drink his blood, you do not have life within you.”

In order to appreciate how radical his words are, we have to understand that Jews were absolutely forbidden to drink the blood of animals. They understood the animal’s blood to contain its actual life force and the pagans who worshipped false gods would drink the blood of the animals when they sacrificed them so they would obtain the particular power of the creature they were worshipping.

The Jews were instructed by their Law not to sacrifice in this way. When they offered animals for the atonement of their sins, they were to pour the blood upon the altar of sacrifice, not drink it like the pagans did. They knew that their strength did not come from the blood of an animal, but from God himself. The Jews never drank an animal’s blood and now Jesus was telling them that they must drink HIS blood if they are to have life within them. Not only was he telling them to do something that was forbidden, but something that was also outrageous. He said they must drink his HUMAN blood and eat his HUMAN flesh if they were to live. They simply couldn’t accept this teaching…it was beyond belief that this man would ask them to do this!

In these seemingly outrageous teachings, Jesus is actually telling his Jewish listeners that he himself is the supernatural food they need to enter into eternal life. He’s telling them – and he’s telling all of us – that the only way we can enter into union with him is to consume his flesh and blood.

He is not speaking symbolically, but literally. His words are clearly understood by the Jews to be advocating cannibalism. He tells us that we must “gnaw” on his flesh, like an animal would chew its food. The Greek word he uses, trógós, is never, never used symbolically as other Christian denominations teach. This word means that we are to literally EAT his flesh and DRINK his blood.

If we put ourselves in the shoes of the Jews who are hearing these words for the first time, we can understand how scandalous this teaching was. To their ears Jesus is saying that they must become cannibals and consume his flesh. Many of them must have thought he was insane…that he had lost his mind! Many today think we Catholics are a little crazy for insisting that Jesus is truly present in the Eucharist. In fact, a good number of Catholics don’t believe it’s true!

But Jesus doesn’t back down. He doesn’t say, I’m just kidding…I’m only speaking symbolically to make a point. NO! He intensifies his teaching by comparing the eating of his flesh to the eating of the manna God provided in the desert to sustain the Jewish people during the Exodus when they were hungry. He concludes by saying that this bread their ancestors ate could only sustain them via natural methods; that they still eventually died after eating it.

Jesus is contrasting this manna that God provided from heaven to the living bread which is his own body, the bread that he gives all of us for everlasting life. Whoever eats THIS bread will live forever.

In the Eucharist we receive and consume the FULL presence, the SUBSTANTIAL presence of Christ so we can become more and more like him. When the deacon or the priest prepares the wine at the altar by adding a little water to it he says quietly, “By the mystery of this water and wine may we come to share in the divinity of Christ, who humbled himself to share in our humanity.”

While we may find the spirit of God in many different places, in God’s Word, in the priest, in the poor and the people of God, in His creation, we only encounter God’s complete and substantial presence in the Eucharist. Only in the Blessed Sacrament is he FULLY present.

Allow me now to spend a few minutes speaking about HOW we are to receive this most precious gift of God. First we must be spiritually prepared to receive. We must be free from mortal sin. We must be in a state of grace. If we are not, we must abstain from receiving until we have gone to confession.

Let’s now review the physical way we are to receive the Eucharist. Let me read what the USCCB says about this.

“Those who receive Communion may receive either in the hand or on the tongue, and the decision should be that of the individual receiving, not of the person distributing Communion. If Communion is received in the hand, the hands should first of all be clean. If one is right handed the left hand should rest upon the right. The host will then be laid in the palm of the left hand and then taken by the right hand to the mouth. If one is left-handed this is reversed. It is not appropriate to reach out with the fingers and take the host from the person distributing.”

These practical guidelines for receiving communion in the hand are important. I distribute communion to hundreds of people and witness various ways people receive it. Some of these ways are just not appropriate when we consider them in light of the bishops’ guidelines and the sacredness of the sacrament.

I witness some people receive the host in the palm of their hand and then lift the palm to their mouth and kind of lick it off their hand. While I believe these people think it’s a more reverent way to receive, it is also possible that they may drop the host as they raise the hand to their mouth. It is much safer to take it from your hand with the other hand and place it carefully in your mouth.

Others come forth carrying a child, and maybe even holding the hand of another child, yet they insist on receiving in the hand. Last Sunday I was assisting at Mass in Canada and a dad came forward in just this way. He momentarily released the hand of one child (he was also carrying a toddler) to reach out his hand to receive. Then he walked away sort of juggling the host in his hand to bring it to his mouth, but also was trying to take the hand of the child at the same time. I’m not sure what he was thinking, but how much simpler and safer it would have been if he had just received on the tongue! Thankfully he did not drop the host…apparently he was quite skilled at this maneuver!

Finally, as the bishops direct, it is not appropriate to reach out with the fingers and take the host from the person distributing. Some people grab the host when it is elevated, which is not permitted. Again, receiving in the hand is a two-hand operation. One hand is used for the minister to place the host and the other is used to take it from the hand to the mouth. If you are unable to use both hands to receive, then simply open your mouth and allow the minister to place the host on your tongue.

Dear friends in Christ, let us never be casual in our reception of the Blessed Eucharist. Let us ask Jesus to change us, to divinize us, as we receive him today. And let us be eternally grateful that he gives us his body and blood, soul and divinity in the Eucharist and let us pray that our worthy reception of it will transform us into his likeness.