Repay to God What Belongs to God 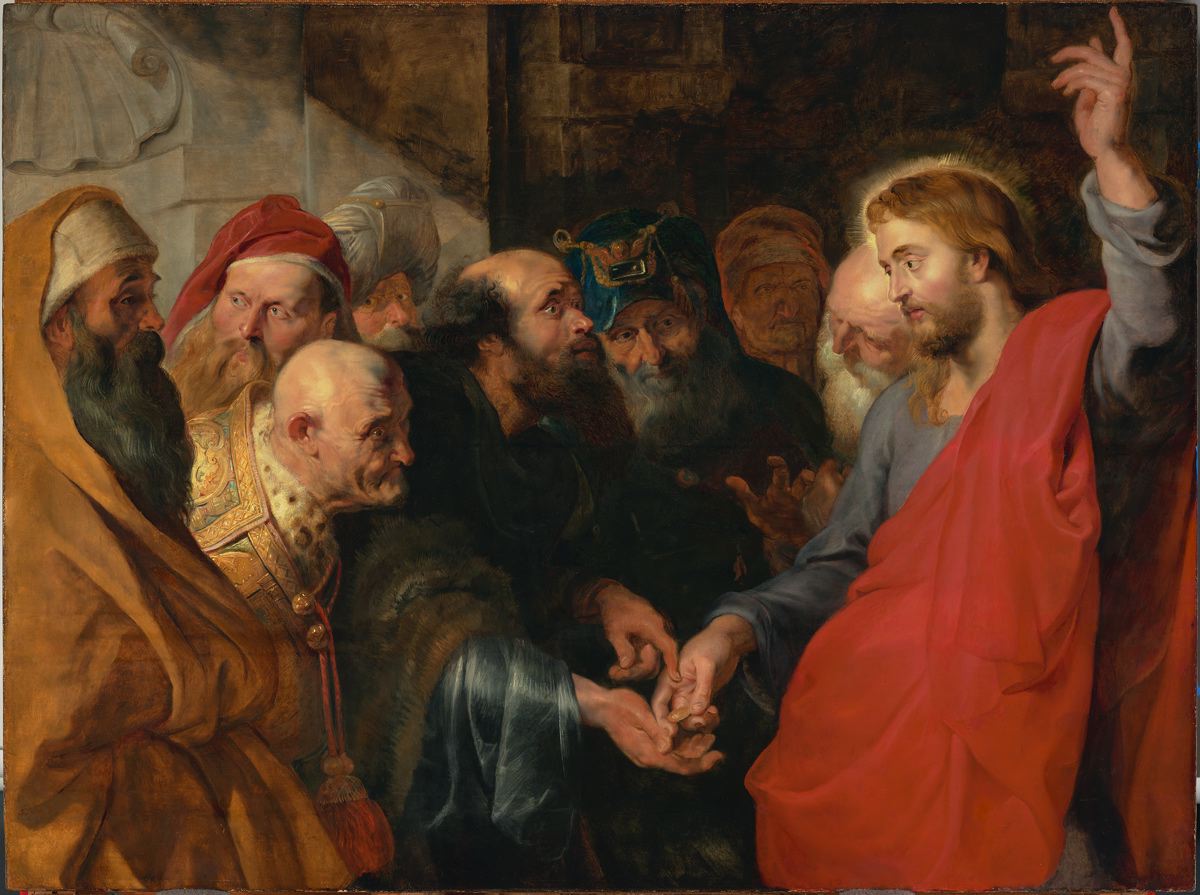 My homily at the 10:00 Mass today at Holy Ghost Church.

“Then repay to Caesar what belongs to Caesar and to God what belongs to God.” Just what does Jesus mean when he provides this answer to the question that was posed to him in today’s gospel? Allow me to provide a little background on why this was such a controversial, and potentially dangerous, question for Jesus to answer.

In Jesus’ time, the coins necessary for paying Roman taxes carried a portrait of the emperor on the front and a relief of the goddess Roma on the back. Each bore the inscription “Tiberius Caesar, eminent son of the divine Augustus; high priest.”

These coins troubled many Jews. Their inscription was considered a blasphemy that affirmed the divinity of emperors & the validity of pagan worship. Their widespread use was a reminder of Roman domination. Whether or not a faithful Jew could use such an object often provoked fierce debates.

The Pharisees tried to trap Jesus in this debate when they asked “Is it lawful to pay the census tax to Caesar or not?” If he said, “pay the tax,” he would affirm the legitimacy of the Roman occupation and many people would hate him. If he said, “do not pay the tax,” then he would be in open opposition to Rome & could be executed for being a revolutionary.

As he had a habit of doing, Jesus answered the question in a TOTALLY UNEXPECTED WAY. Rather than allowing himself to be trapped by it, he used it to explain that one must follow both the civil law and God’s law.

What we need to understand is the Church teaching that these two types of laws – civil law and God’s law – are NOT EQUAL in weight. The Church is crystal clear that God’s moral law carries more weight than man’s civil law. Following God’s laws must be our first priority. Following civil law is important, AS LONG as that law does not violate God’s law.

“The citizen is obliged in conscience not to follow the directives of civil authorities when they are contrary to the demands of the moral order, to the fundamental rights of persons, or the teachings of the Gospel. We must obey God rather than men.” -CCC 2242

Listen carefully to what the Church teaches about this in the Catechism:

“The citizen is obliged in conscience not to follow the directives of civil authorities when they are contrary to the demands of the moral order, to the fundamental rights of persons, or the teachings of the Gospel. We must obey God rather than men.”

Understanding this important Church teaching is essential to understanding the often misunderstood concept of separation of Church and State, touted by many people in today’s society to justify why the Church has no business weighing in on matters of civil secular law.

The original meaning separation of church and state in our Constitution was very different than what many think it means today. In fact, did you know that the phrase “separation of church and state” does not even exist in the Constitution? It’s a phrase that was introduced in 1947 by the Supreme Court in Everson vs. Board of Education to restrict States from funding or granting privileges to religious organizations in the same way federal funding has always been restricted from doing so.

The First Amendment of our Constitution actually reads “Congress shall make no law respecting an establishment of religion, or prohibiting the free exercise thereof.” The intent was to ensure that the United States would not have an official “state church” like England had. The founding fathers did not want to give preferential treatment to any one church or denomination, particularly in regards to taxpayer funding.

Here’s the point: There is nowhere in the Constitution that forbids individuals from mixing faith and politics or from sharing their faith in a state-related function or location!

We have seriously misunderstood what “separation of church and state” means. Again, to the founding fathers, the First Amendment existed to keep the state OUT OF THE CHURCH, not the church out of the state.

Honestly, I think many Christians use the phrase to justify their lack of taking a stand on the tough, moral issues that challenge our society today. By saying they believe in the separation of church and state, many attempt to justify their lack of action based on the false notion that it is not the church’s right to interfere in what they believe are secular legal matters. Those who take this position simply do not understand our Christian obligation, made clear in today’s gospel reading, to repay to God what belongs to God.

The danger of our contemporary – and incorrect – notion of the separation of church and state is that we are on a path that relegates religion to a purely personal, private matter that essentially has no bearing on the civil laws that govern our society.

“Religion [cannot] be relegated to the inner sanctum of personal life, without influence on societal and national life. The Church cannot and must not remain on the sidelines in the fight for justice.” -Evangelii gaudium, 183.

Pope Francis instructs us in his recent Apostolic Exhortation entitled EVANGELII GAUDIUM, that “Religion [cannot] be relegated to the inner sanctum of personal life, without influence on societal and national life. The Church cannot and must not remain on the sidelines in the fight for justice.”

Our Christian values are under attack by a society that believes we should be silenced. Consider the Federal Appeals Court that ordered the removal of a memorial in Maryland built in 1925 honoring the death of soldiers killed during the World War I.

The court stated it was because the 90 year old, 40-foot-tall cross-shaped memorial – built by the American Legion and private donations, but maintained over the years with public funds – “has the primary effect of endorsing religion and excessively entangles the government in religion.” Really? Taking a 90 year old World War I memorial down because it’s in the shape of a cross?

This is just one example of how our religious freedom is under attack in this country. And it’s going to get worse. Unless we each understand how important it is for us to render to God something more than one hour on a Sunday, we will not understand the importance of giving back to God what belongs to God until it’s too late. We must be willing to stand up for our belief in and our love of God and oppose these blatant attacks on our faith. Our failure to take a stand will increasingly result in our loss of religious freedom as is so aggressively taking place in Canada today.

We should never use the excuse of “separation of church and state” to justify our unwillingness to defend God’s moral law in the public square. Imagine what Jesus will say to you when you meet him face to face and try to explain that you didn’t take a stand on today’s serious offenses against God’s moral law – abortion, euthanasia, the loss of our understanding of the sanctity of marriage between a man and a woman – because you believe in the separation of church and state. How do you think that conversation will go?

Here’s the bottom line. We must not let our government and our secular culture convince us that our faith is simply a matter of private worship, meant to be exercised only within our churches or in the privacy of our homes. We must take our faith everywhere with us, into our workplaces, into the polling places, and into all the places where we relax and are entertained.

Let us remember the words of Jesus when he clearly communicated in Matthew’s gospel the consequences of not standing up for God’s moral law. There he says:

Never, ever be afraid to bring your faith into the public square. Always be ready to defend God’s moral law as taught by our Holy Catholic Church. It is ESSENTIAL and especially URGENT in today’s secular society.