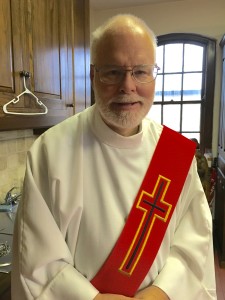 Today we celebrate the Memorial of Saint Stephen, who was among the first group of seven deacons appointed by the apostles and also the first Christian martyr. Deacon Mike Gouge gave a wonderful homily today at morning Mass on St. Stephen and also spoke of several other deacons who are recognized by the Church as Saints.

Of particular interest to me was St. Benjamin, deacon and martyr, whose feast day we celebrate on my birthday, March 31st. It seems as though this street preacher suffered the cruelest of torture for his unwillingness to cease preaching about Christ during the 40 years of Christian persecution in Persia in the early fifth century.

Just yesterday was the joy-ﬁlled Christmas celebration of the birth of our savior Jesus
and today we encounter the feast day of a martyr Suffering in the manner of our savior.
The feast of the ﬁrst martyr of Apostolic timé, the deacon Stephen, is celebrated on this
day after Christmas. Like deacons today, he was proclaiming the Gospel but his
audience could not bear “the wisdom and the spirit with which he spoke.”

The liturgical color for today is red and it is a special opportunity to reﬂect on the gift
of martyrs to the Church triumphant and also to us today in this modest parish church.
Martyrdom is the supreme witness given to the truths of the faith, bearing witness even
unto death. The martyr bears witness to Christ who died and rose, to whom he is united
by charity.

Stephen’s name means “crown,” and he was the ﬁrst disciple of Jesus to receive the
martyr’s crown. Stephen was a deacon in the early Christian Church. The apostles had
found that they needed helpers to care of the widows and the poor. So they ordained
seven deacons, and Stephenis the most well-known of these.

God worked many miracles through St. Stephen and he spoke with such wisdom and
grace that many of his hearers became followers of Jesus. The Jewish enemies of the .
Church were furious to see how successful Stephen’s preaching was and they laid a plot
for him. They could not answer his wise arguments, so they got men to lie about him,
saying that he had spoken sinfully against God. St. Stephen faced that great assembly of
enemies without fear. In fact, Acts says that his face looked like the face of an angel.
The saint spoke about Jesus, showing that He is the Savior that God had promised to
send. He scolded his enemies for not having believed in Jesus. At that, they rose up in
great anger. But Stephen looked up to Heaven and said that he saw the heavens opening
and Jesus standing at the right hand of God. His hearers plugged their ears and refused
to listen. They dragged St. Stephen outside the city of Jerusalem and stoned him to
death. The saint prayed, “Lord Jesus, receive my spirit!” Then he fell to his knees and
begged God not to punish his enemies for killing him. After such an expression of love,
the holy martyr went to his heavenly reward.

It is no accident that the day of the ﬁrst martyr follows immediately the day of the birth
of Christ. Just as we rejoice and mourn at once, in the birth and in the Passion of Our
Lord; so also, weboth rejoice and mourn in the witness and death of martyrs. We
mourn, for the the world that has martyred them; we rejoice, that another is
numbered among the Saints in Heaven, for the glory of God and for our salvation.

Yesterday we celebrated the joyful birth of a child; today we celebrate the cruel death of
an innocent man. In some ways, the birth of Jesus led to the death of Stephen. Stephen
was put to death because of his faith in Jesus. Stephen died as Jesus died as both were
“ﬁlled with the Holy Spirit.” We have been given the giﬁ of the same Holy Spirit, and it
is the Spirit who empowers us both to live like Jesus and to die like Jesus. On this feast
of Saint Stephen, we pray for a fresh outpouring of that Spirit into our lives.