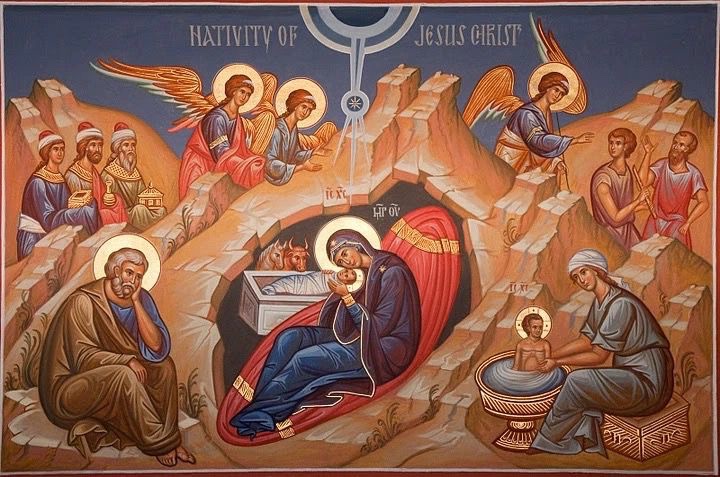 On this morning of Christmas Eve, we stand at the threshold of the fulfillment of the amazing prophecies made throughout time by the prophets of the Sacred Scriptures. In our first reading, we hear the prophesy of of Nathan to David regarding the establishment of David’s house and kingdom that shall endure forever. This prophesy took place some 1,000 years before the Incarnation.

In today’s gospel reading we hear Zechariah’s prophesy. The words of his prayer are clearly prophetic. Zechariah utters them immediately upon regaining his speech, which he had lost nine months before due to his unbelief of God’s announcement to him that his elderly wife Elizabeth had conceived a son, who would be named John.

What’s so wonderful about Zechariah’s prayer (and why the Church asks its clergy to pray it every day in the Liturgy of the Hours) is that it sums up magnificently the whole history of salvation, putting Jesus and John in the context of the great story of Israel.

On this day, Christmas Eve, in many places throughout the world, the Christmas Proclamation is recited or sung, drawing upon Sacred Scripture to declare in a formal way the birth of Christ. It provides historical context for that perfect time in which our savor came to dwell among us in the flesh. This proclamation begins with creation and relates the birth of the Lord to the major events and personages of sacred and secular history. The particular events contained in the announcement help to situate the birth of Christ in the context of salvation history.

I’d like to share it with you now. With hearts full of joy let us listen to this proclamation of our Savior’s birth from the Roman Martyrology for Christmas day.

The Nativity of our Lord Jesus Christ
The Twenty-fifth Day of December,

when ages beyond number had run their course
from the creation of the world,
when God in the beginning created heaven and earth,
and formed man in his own likeness;

when century upon century had passed
since the Almighty set his bow in the clouds after the Great Flood,
as a sign of covenant and peace;

in the twenty-first century since Abraham, our father in faith,
came out of Ur of the Chaldees;

in the thirteenth century since the People of Israel were led by Moses
in the Exodus from Egypt;

around the thousandth year since David was anointed King;

in the sixty-fifth week of the prophecy of Daniel;

in the one hundred and ninety-fourth Olympiad;

in the year seven hundred and fifty-two
since the foundation of the City of Rome;

in the forty-second year of the reign of Caesar Octavian Augustus,
the whole world being at peace,

JESUS CHRIST, eternal God and Son of the eternal Father,
desiring to consecrate the world by his most loving presence,
was conceived by the Holy Spirit,

and when nine months had passed since his conception,
was born of the Virgin Mary in Bethlehem of Judah,
and was made man:

The Nativity of Our Lord Jesus Christ according to the flesh.

May God increase our understanding of his perfect plan to send his Son into the world at just the right time so that our faith will be increased and our lives will continue to be transformed by his love. May this increase of our faith help us to understand how God is using the circumstances of our lives, however challenging they may be, to draw us ever closer to him, preparing us for that glorious day when we meet him face-to-face in the Kingdom of Heaven.

May we never doubt that God’s plan of salvation is perfect and may we resolve to always seek to do our part in bringing it about. May we have a new appreciation for how blessed we all are to be alive at this particular time in history when we are able to see that which the prophets longed to see, the nativity of our Lord and Savior Jesus Christ.

May God bless each one of you as you open your hearts to welcome the Divine Infant into your lives and into your homes this Christmas season.