The Prodigal Son: Repentance and Forgiveness 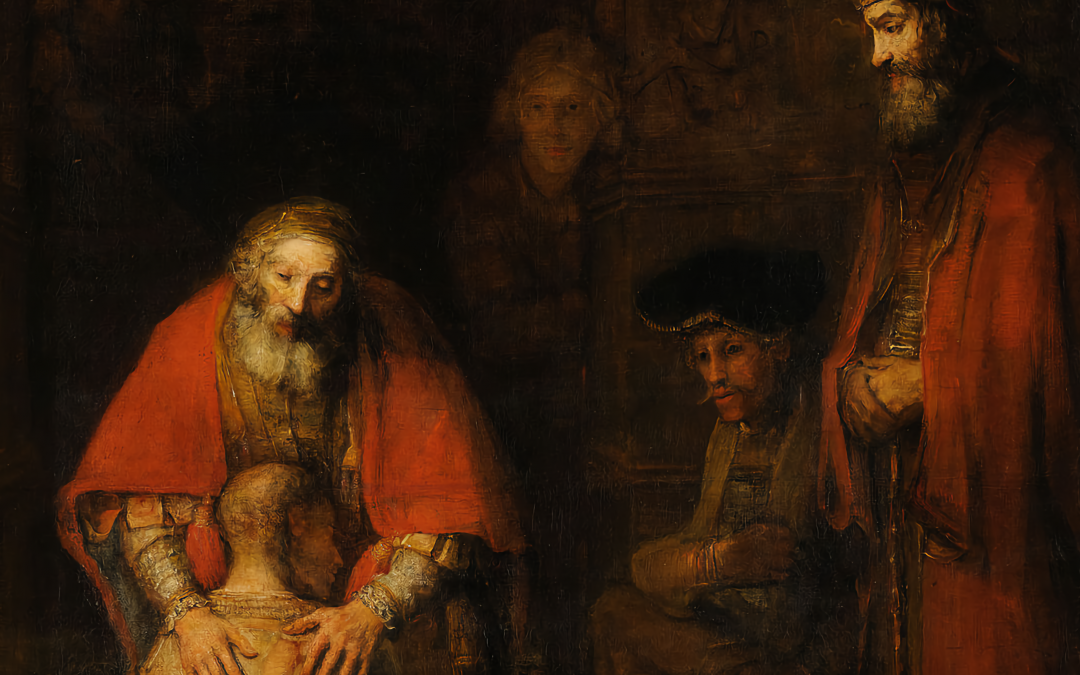 In this season of Lent the Church emphasizes our need for repentance and forgiveness in its selection of readings.

Today, Jesus shocks those gathered around him listening to this parable. They were tax collectors, sinners, scribes and Pharisees, a group that needed to hear about forgiveness! The Pharisees and scribes began to complain saying, “This man welcomes sinners and eats with them.” Eating with sinners meant God’s acceptance of them, even when they were stuck in their patterns of sin. Jesus responds with his most celebrated parable, The Prodigal Son.

To some this is an unfair story. They feel sorry for the older son, convinced he got a raw deal. They believe the younger son got away with murder. They maintain that he should have been punished – to teach him a lesson. What do you think?

Yes, the younger son behaved badly. He was determined to have his fling, no matter who he hurt. To demand his inheritance was essentially to wish his father’s death. This had to hurt his father deeply, but he gave the son what he asked for.

When the money ran out and his friends vanished, the younger son found himself alone in a foreign country taking care of pigs. He had lost his identity, lost his God. He had lost everything. He was helpless.

Upon hitting rock bottom, Jesus says he “came to his senses.” His pain made him realize the pain he had caused his father. He said to himself, “I am dying from hunger. I shall get up and go to my father and say, “Father, I have sinned against heaven and you. I no longer deserve to be called your son; treat me as you would one of your hired workers.”

This was a courageous decision. Humiliated and desperate, he was expecting nothing. The journey back home was surely a lonely and fearful one. He was coming home burdened with the shame and disgrace of his own making. He must have felt undeserving of mercy or a second chance. Suppose his father didn’t accept him back, what then? He believed that he deserved to be punished and he even asked for it.

Jesus then tells us that “While he was still was a long way off, his father caught sight of him, and was filled with compassion. He ran to his son, embraced him and kissed him.” Throwing his dignity away, his father welcomed him back with open arms. The biggest discovery the younger son made was that his father had never stopped loving him.

It’s an extraordinary experience to be loved in our sinfulness, isn’t it? Those of us who have experienced this kind of love know something about the heart of God.

It’s so easy for us to get caught in the trap of thinking that we’ve done something so wrong, so terrible, that God will never forgive us. But this simply isn’t true. When we wander off to pursue our selfish desires and fulfill our sinful fantasies, our Father is always waiting for us, looking for us, pursuing us. He not only wants to forgive us, he wants to lavish his gifts upon us, if only we would acknowledge our failures and ask for forgiveness.

God’s mercy is not about fairness or the world’s notion of justice. His mercy is so extravagant that we have a hard time wrapping our heads around it. We live in a world run by the logic of conditional love and cautious acceptance. It’s the kind of logic that equates justice with vengeance and fairness with retribution. When someone hurts us, we must hurt them back…or at least shun them. This is the logic the world teaches us.

It’s the same logic the older brother used when he confronted his father. Why are you being so generous to him and not to me? Don’t I get anything for all my hard work? Where’s the justice in that? But the reality is that we can never earn God’s love.…and we don’t have to earn it! God’s love is freely and generously given to all of us.

According to God’s divine mercy, every sin can be forgiven and forgotten. It’s this merciful love that welcomes back the unrighteous prodigal and begs the self-righteous brother to soften his heart. The logic of divine love tells us that we have a heavenly Father who looks upon us with mercy, not judgement. Remember that Jesus said he came to save the world, not to judge it.

We experience God’s judgement for one of two reasons. It’s either because in our hardness of heart we refuse to acknowledge our sins and ask for forgiveness, or it’s because we refuse to forgive others.

This parable forces us to look at ourselves honestly, just like God does. Are we the son who rebelled but then returns, or are we the son who never leaves the father’s house, but harshly judges those who do? Do we feel entitled to experience God’s goodness because we’ve always followed all the rules?

From the beginning Jesus says that this is a story about two sons. Which one of these two has yet to understand and experience the Father’s extravagant love? Which son or daughter are we? Of what do we need to repent?

If you remember nothing else from my homily today, remember these two things:

If we always remember these two things and make them the top priorities of our lives, we will certainly experience the joy of knowing and living in the Father’s great love. This love will change our lives by lifting the heavy burdens of sin and judgement from our shoulders.