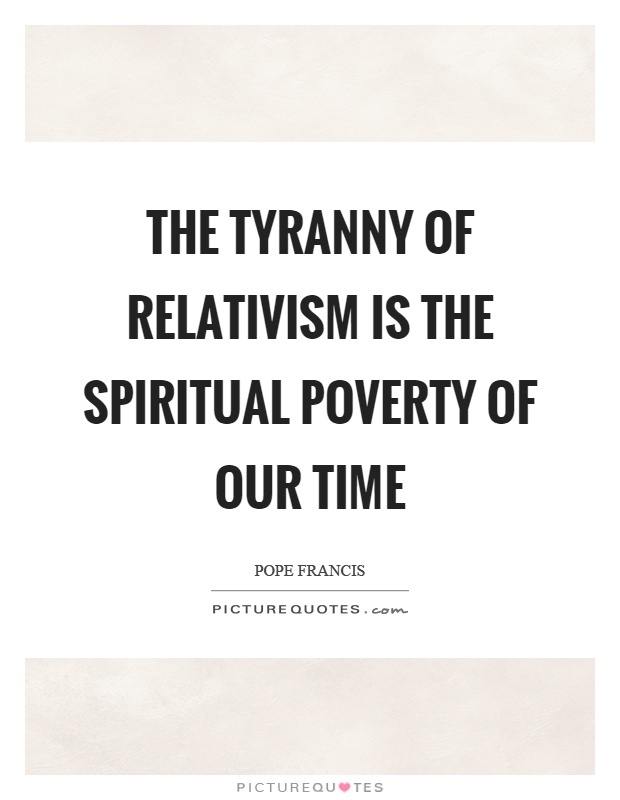 So many people in today’s culture, sadly so many Catholics, have bought in to the idea that there is no such thing as absolute truth. They think what is “true” for me need not be “true” for you. They may believe some of what the Church teaches, but they don’t believe those teachings that are inconvenient or contrary to their lifestyle. Pope Benedict XVI called this the Dictatorship of Relativism. Pope Francis refers to it as the tyranny of relativism.

When I challenge people’s behavior that is contrary to the teachings of Christ and his Church, I am doing so in love so they might correct their behavior and come to understand why God gives us his commandments. He gives us his commandments because he wants to protect us. He wants us to experience the true joy of life found only in following his plan for us! He wants us to follow his teachings because they are good for us. He doesn’t want us to get hurt. Just like the mother who tells her son not to put a fork in an electrical outlet because she knows what will happen if he does. Is she being intolerant because the boy wants to do it and she corrects him? Is she being a hater or a loving mother who wants to protect him?

So often when we proclaim the truth to others regarding the lifestyle they lead, we are accused of being intolerant and judgmental…often by other Catholics! If you think that cultural relativism leads to greater tolerance and love, take a few minutes to listen to Chris Stefanick’s talk to young people about this insidious notion that there is no absolute truth. That everyone can do whatever they want and we should do nothing to challenge them. After all, this is the modern world and Jesus lived 2,000 years ago. We are much smarter now then those people were then, right? Wrong.

As Catholics one of our fundamental prayers is “Glory be to the Father and to the Son and to the Holy Spirit. AS IT WAS in the beginning IS NOW and EVER SHALL BE, world without end, amen.” We certainly don’t say “As it was in the beginning was true then but it’s changed and will continue to change according to the values of the culture.” God never changes…he can not change. And his incarnate Word, Jesus Christ himself, is the same now as he was when he walked upon this earth. Thank God he remains the same forever and ever. Just because our values change over time doesn’t mean the truths of life itself change.

How do we overcome this dictatorship of relativism that runs rampant today in both religious and secular circles? Believe the teachings of the Church and follow them! This is how we come to know the Truth. As Jesus told us, if you love me you will keep my commandments. If we don’t keep his commandments, it only follows that we don’t love him. No, it’s not easy to keep Jesus’ commandments in a culture that believes everyone can have their own truth. But keeping his commandments is necessary for our salvation and is absolutely worth pursuing.

Will we fail and fall as we strive to fully follow the Church’s teachings? Of course we will but we only need to recognize our failures, confess them, dust ourselves off and get back to trying to live a life that is in conformity with the Truth. The key is to be humble enough to recognize our failures and tell God that we are sorry for our sins. Persisting in sin and defying God’s truth will only lead us into danger and, ultimately, into despair.